Heart disease is a significant concern in the United States. The Center for Disease Control states that it affects 26.8 million Americans. As a result of so many people affected by heart disease, many people are looking for ways to lower their cholesterol levels.

Cholesterol is a substance that travels through the blood. Too much of this fatty substance can cause it to stick to the walls of blood vessels. Sticking to the walls causes them to get narrow or even to get blocked, which leads to heart disease.

Recent studies are showing that apples are a great natural alternative for lowering apples cholesterol.

A recent study was done by Florida State University to show the effect that apples have on naturally lowering cholesterol.

160 women participated in the study for a year. They were between the ages of 45-65, and they were either given 75 grams of dried apples or dried prunes every day. Their blood levels were examined at three months, six months, and twelve months.

The women also lost on average 3 lbs of weight even though they were eating 240 extra calories every day. The researchers believe it happened because apples naturally produce a compound that suppresses appetite.

How Many Apples Should You Eat?

The study specifically used dried apples because they can deliver the most nutrition in the smallest available portions. Eating 75 grams of dried apples a day would produce a similar result as the study.

If someone were to eat the same amount in fresh apples, one would eat four or five a day.

Dr. Armandi was one of the researchers at Florida State University. Dr. Armandi says, “Everyone can benefit from consuming apples.” So eating even an apple or two a day would have many benefits.

The results of the study has gotten scientists so excited that they plan to breed new apples that will be available in four to five years.

Apples for Protecting Eyes and Joints

They plan on breeding red-fleshed apples that are packed with nutrients. The apples will be able to also protect eyes and joints, and help in fighting Alzheimer’s and diabetes.

Other Foods That Lower Cholesterol

There are other foods besides apples that can naturally lower cholesterol levels.

Foods high in soluble fiber have been known to help. This includes oatmeal, kidney beans, pears, barley, and prunes.

Plant sterols also help. They are often added to margarine, orange juice, and yogurt. The best amount would be 2 grams daily. This would be the same as drinking 8 ounces of fortified orange juice.

There may be some truth to that adage, “an apple-a-day keeps the doctor away.” Research completed at the University of Massachusetts, suggests that consuming apple juice protects brain cells against oxidative damage that contributes to age-related memory loss.

The results from this study, published in a recent issue of the Journal of Alzheimer’s Disease, suggest that eating and drinking apples in conjunction with a balanced diet can protect the brain from the effects of oxidative stress that leads to impaired mental function. The results also underline the importance of a diet rich in antioxidants to help stay mentally sharp throughout life.

This study used a well-established animal protocol and reported that apple juice provided a protective effect against oxidative brain damage in aging mice. Oxidative damage to cells is caused by free radical production that increases during the aging process. Brain cells are particularly sensitive to oxidative damage. These findings show that there is something in apples that protects brain cells in healthy aging.

The dose that provided these benefits equated to the juice obtained from 2 large green apples. Green apples are bursting with fiber, low in calories and have a low GI. That means the calories from an apple probably won’t be stored as fat or inhibit the fat burning process. This information suggests that an apple-a-day maybe the perfect brain boosting diet snack for people that want to stay lean. 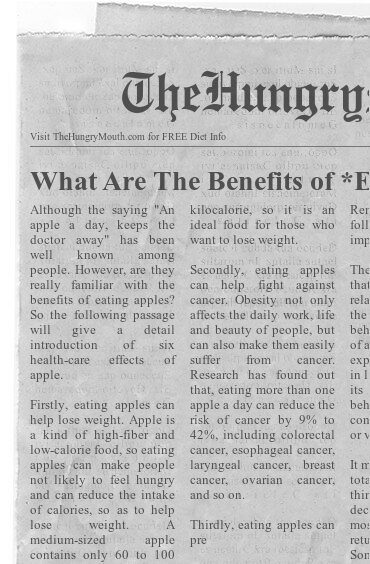 WANT TO KNOW HOW TO MAKE KIMCHI?

IS STEVIA BETTER THAN ASPARTAME AND SUCRALOSE?