Do you want to burn fat and speed up your metabolism? I would like to share 10 ways to increase your metabolism by using nothing but the power of food!

By merely cutting out 300 kcal from your daily diet, you will lose 1 pound of body fat per week (500kcal equals to 1lb of fat). So what would happen if you increased your BMR through the foods you eat?

10 Foods That Speed Up Your Metabolism To Burn More Fat

This is where the real magic is:

Cinnamon has been linked to an increase in metabolic rate and fat oxidation-the process by which fatty acids are broken down into usable energy for the body, often resulting in weight loss.

So, how should you eat it? Put some cinnamon on your cereal or oatmeal, put it into a smoothie, or even mix it into your sandwich!

Cloves and nutmeg have similar effects as cinnamon. If you’re not a fan of these flavors though I recommend boiling them to make tea. Not only will this drink help break down persistent belly fat but also reduce levels of LDL cholesterol—also known as the “bad” kind which is linked to heart disease.

Green Tea is one of the best drinks you can have to increase your metabolism. Just make sure not to add any sugar or milk because this will only reduce the effects on your metabolic rate.

Ginger, just like some other spices on my list has thermogenic properties which speed up metabolism and thus burn fat. What makes ginger even more unique is that it’s also linked to improving digestion which speeds up the process of nutrients being broken down even more!

Chili peppers are not just a delicious thing to put into your food but they’re also fantastic for speeding up your metabolism—almost as much as ginger! What’s even better is that chili peppers have been linked to lower cortisol levels which reduce stress and thus lower weight gain too.

I know all you watermelon haters out there will be disappointed to hear this, but watermelon is a very effective fruit when it comes to speeding up your metabolism. I know you’re thinking: But watermelon is mostly made of water! That’s true, but the rinds contain a special enzyme called citrulline-malate that converts into another compound called arginine which actually speeds up the metabolic process.

Eggs are one of the easiest and cheapest ways to dramatically boost your metabolism because they have an amino acid called leucine which helps increase fat breakdown in muscles after exercise resulting in weight loss.

White beans have a fantastic combination of several nutrients that lead to weight loss and thus a higher metabolic rate including magnesium, potassium, fiber, and protein! What’s even better is that they have the greatest amount of the amino acid arginine which increases the production of nitric oxide in blood vessels which lowers blood pressure—a factor linked to obesity!

Greek yogurt will give you a similar effect as white beans. This is because it’s well-known for being high in protein and calcium which helps break down fat and lower blood pressure respectively.

Spinach, kale, cabbage—you name the green veggie! All of these are fantastic for boosting your metabolism not only due to their high fiber content but also due to their vitamin C content. They all help metabolize foods like fatty acids better than usual speeding up the process of breaking down food into nutrients that your body can use.

What do these 10 foods have in common? They’re all packed with nutrients that help speed up the process of your body converting food into energy—your metabolism! Keep these foods in mind next time you’re grocery shopping and it just might be the one thing that helps you burn fat!

Weight loss always comes down to one thing: calories. You can eat all the “metabolism boosting” foods you want and still gain weight if your calorie intake is higher than your expenditure.

On the other hand, you can eat what’s healthy and not gain weight by eating fewer calories than you’re burning. So even though metabolism-boosting foods do have some health benefits just don’t rely on them!

Weight loss is mostly about numbers so don’t forget to actually track your calories burned/eaten before worrying about “boosting” your metabolism.

Calories in vs. calories out is more important than anything else when it comes to weight loss/gain.

How To Speed Up Your Metabolism Naturally- Without Pills

Speeding up your metabolism to burn fat. 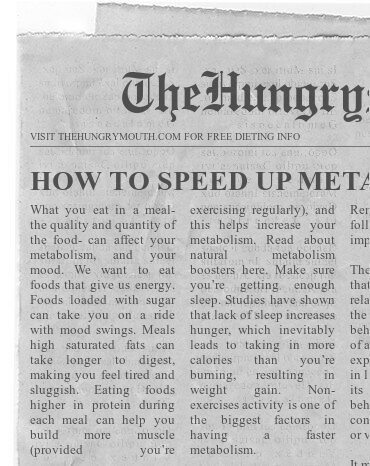 More On How To Speed Up Metabolism

IF YOU WANT TO LOSE WEIGHT YOU *NEED* TO BOOST METABOLISM.

HOW MUCH WEIGHT CAN YOU LOSE IN A MONTH WITH A FAST METABOLISM?

SUPPLEMENTS- HOW TO INCREASE METABOLISM FOR WEIGHT LOSS.