Scared Skinny – The Truth About Dieting 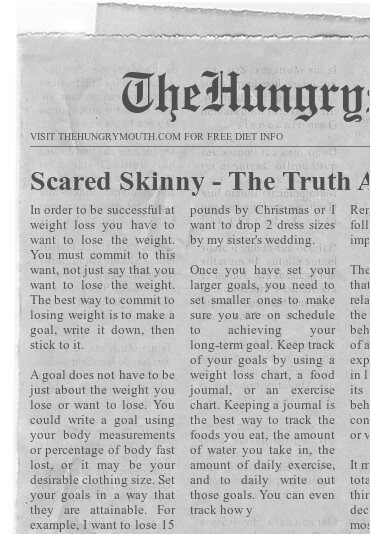 Everybody tries to diet, the losers win. Some of the few success stories are people who try to get some meat on their bones, instead, like me. I have been re-educated by a video entitled How to Get Fat Without Even Trying, that becoming obese is possible.

How did I overcome that need to become robust? Why am I this scarecrow, unable to gain weight? I ask myself this on a regular basis. Every time I look in the mirror, I see someone who needs to consume food daily, who is a slave to daily food supplies, who is no longer full of stamina and vigor, which many people associate, at least subconsciously with being slightly overweight, including myself. I’m skinny and not entirely happy with this, or the difficulties in finding clothing that fits properly. THINKING ABOUT STARTING AN INTERMITTENT FASTING DIET?

Everybody Tries to Diet, The Losers Win

For my New Year’s resolution, I decided to gain ten pounds. This has been my New Year’s resolution for the past ten years, and I never, ever seem to be able to keep it. Perhaps I sabotage my own efforts to gain weight; this is probably it. I misuse the calorie-counting charts, calculating everything I place into my mouth, each and every bite goes down onto paper, which takes up a lot of time.

However, it builds my basic math skills to the point where I am sometimes able to count the calories of what I eat into my head. However, an inspirational video, How to Get Fat Without Even Trying, has indeed changed my life.

Why waste your time in dangerous activities like house-cleaning, gardening, home repair, speed-walking, pentathlon practice, or other calorie-burning activities, when you can become an armchair athlete, and gain ten pounds, just like I did? That’s right, I gained ten pounds while sitting around, attempting to do absolutely nothing whatsoever, and so can you! That’s right; you, too, can experience the benefits of effortless weight gain. Take a look at this video, How to Get Fat Without Even Trying, and become yet another Rubenesque work of art.

Then, there are the activity calorie charts, just to make life more complicated, and, at the very least, add to my caloric expenditure for when I walk up and down the stairs, thumbing through the literature, just to make certain that my caloric intake balances my caloric “burn.” Worrying about balancing my caloric “budget,” I guess I become a caloric “spendthrift,” just to sabotage my own efforts to be thrifty with my calories.

Then, there are the phone calls to the companies that are sometimes made, just to verify that a certain meal contains x amount of calories, given portion serving. It sounded more like creating math problems for a remedial math textbook than working on a meal plan at times, which became frustrating, adrenaline-producing, and burned up calories.

I had a minor weight problem as a teenager, some of the time. I was one of those roller-coasting dieters, always trying to lose weight, then gaining it back. The diets worked, I kept my baby fat on, and could always fit into something fashionable at any department store I visited. Every department store carried something fashionable in size 10, and I was proud of my newly-gained weight. After having been kicked around on the beach, I could finally hold my own.

I Quickly Dropped Fifteen Pounds While Working Out

Then, I found myself around people who wore a size 14, and dating men who told me that I needed to gain weight. I would go to museums, envying the paintings of women, scantily clad, or in heavy medieval fabrics, all of whom were “in the flesh,” rather than “flesh and bones.” This caused me to develop obsessive-compulsive tendencies about dieting, I guess. I quickly dropped fifteen pounds while working out, drinking weight gain formulas, and calculating my caloric intake on a daily basis.

Don’t diet; instead, think, “I’m trying to gain weight.” Maybe that’s the tip; if we all tried to look like ‘Renaissance women,’ we’d be too thin. This is not the Middle Ages, and I have to fit on a tiny seat, squeeze past crushes of people, modern life is something which requires having a hard body to do properly.

Let me know if you’ve had experiences similar to these if you had ever found yourself in a quagmire so thick that you started to lose weight when you worried about not being heavy enough to compete in the next wrestling match or join in at the next Society for Creative Anachronism fashion show.

Have you ever thought about skinny people, most of whom look like just flesh and bones, many of whom have a lot of other health problems, have you ever really worried about the possible consequences of being too thin? A lot of thin people tend to have skin that wrinkles more quickly than people with a little bit of healthy body fat.

Here is a quick bit of information from Cooking Light magazine – people who skip breakfast tend to gain weight, so I started skipping breakfast. I dropped five pounds and had no idea of how this had happened to me until I read the article again, more carefully. Why is it that all these weight gain tips work for everyone else, and not myself? I am not really complaining, as I have also just learned from reading through Remedy magazines that people who are overweight tend to have more back problems, and I certainly cannot afford back problems.

Being content with one’s body image might be the way to go, just accepting yourself for who we are and what we look like. However, most of us have a certain amount of interesting personal quirkiness to work through in order to get something done, such as maintain an acceptable body image.

Attractive And Thinner Self

There are also the worries about losing weight and needing to give away all the old clothing to a thrift store, or needing to have a yard sale, or needing to alter the entire clothing closet to reflect a less attractive and thinner self. Who wants to do that?

A lot of us have an idea that thinner people are more neurotic, less happy, and worry more – this is a common idea that is unsubstantiated; however, many of us still have this hard-wired thought that if we are a little bit heavier, we are more successful and content with our lives. How did this idea about needing to gain weight get programmed into our collective subconscious, I do not know.

However, if we bring this idea into our conscious awareness, we can manipulate this cultural glyph, this idea about weight gain, to our advantage.